Pitchfork on the Water: What's Wrong with the Stock-to-Flow Model when Trading Bitcoin

The popular Stock-to-Flow (S2F) model from an institutional investor dubbed Plan B allows bold predictions on the price of Bitcoin.  R... 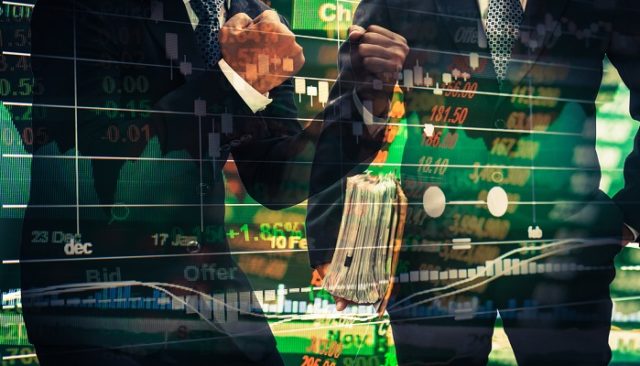 The popular Stock-to-Flow (S2F) model from an institutional investor dubbed Plan B allows bold predictions on the price of Bitcoin. Recently, analysts at Weiss Crypto Ratings calculated the  price of the first cryptocurrency at $ 70,000 based on it  by mid-2021. The author of the model previously predicted $ 100,000 per BTC by the end of next year.
Strix Leviathan, a cryptocurrency hedge fund, examined S2F in terms of its theoretical background and foundations, as well as the mathematical methods used.
The analysis of the model and the conclusions of the chief investment officer of Strix Leviathan, Nico Cordeiro, outlined in the article  "The chameleon model or why S2F is fundamentally wrong for bitcoin . " ForkLog magazine offers its translation.
The S2F model of an anonymous Dutch institutional investor known on Twitter as Plan B has gone viral and is being used by bitcoin advocates for price predictions.
However, we believe that its accuracy is about the same as that of astrological models of the past for financial projections. But astrology was really considered a mathematical science at the beginning of the 20th century.

The term "chameleons" was coined by Stanford University professor Paul Pleifderer to refer to models based on dubious assumptions and more credible than they deserve.
Evaluation of any model should begin with a critical look at its theoretical assumptions. As an example, Pleifderer gave the following scenario:
“Imagine a pricing model for an asset based on the assumption that there is no uncertainty about its return. No serious person would attempt to empirically test such a model before rejecting it. The model can be rejected simply on the grounds that its core premise is contrary to the truth. "
Chameleons are difficult to spot and challenge as they appear to be significant. It is only with deep study that you realize that they are built on assumptions that contradict reality.

Plan B 's article,  Scarcity Modeling the Value of Bitcoin,  states that some precious metals have retained the role of money throughout history due to their hard-to-counter value and low new supply. For example, gold is valued due to its low production volume compared to reserves and the impossibility of counterfeiting huge reserves around the world. Plan B argues that the same logic applies to bitcoin, which rises in value as the rate of issue decreases every four years and the total supply never exceeds 21 million BTC.
Plan B called the low emission rate "rare" and proposed to quantify it with a metric called Stock-to-Flow (S2F). It represents the ratio of the current supply (stock) to the inflow (flow):

He then translated the premise into the hypothesis that "the scarcity as measured by S2F directly affects the price." Plan B plotted the S2F for Bitcoin relative to its dollar market cap by adding two randomly selected points for gold and silver. 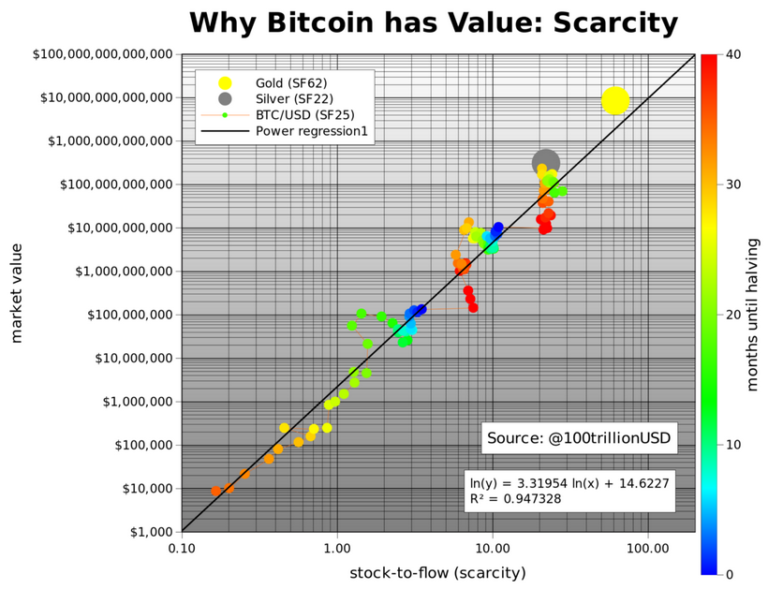 The analyst then performed linear regression using the natural logs of S2F and market cap as the independent and dependent variables, respectively. Linear regression produced the following equation: 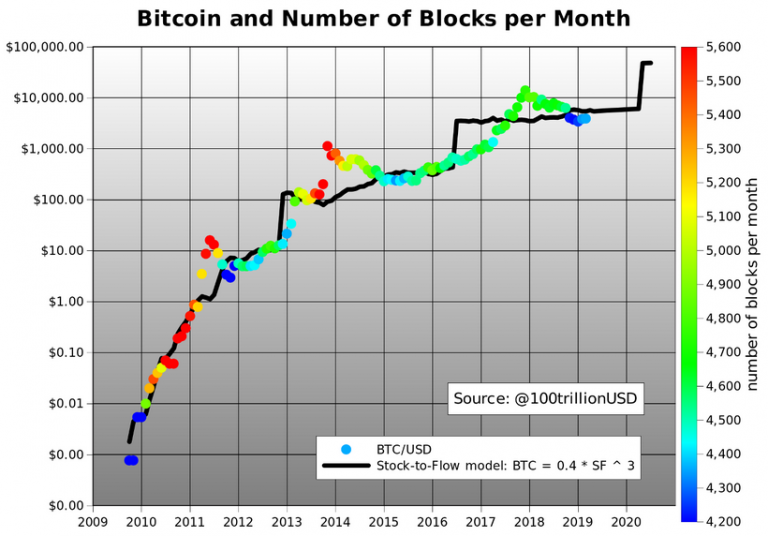 Eventually he concluded that there is a statistically significant relationship between the market capitalization in U.S. dollars and the value S2F, as evidenced by  linear regression  with  a coefficient of determination R 2  (statistical measurement of how closely the data fit to a regression line) in ~ 0.95 ...
Two randomly selected data points for gold and silver correspond to the trajectory of bitcoin and are presented as additional evidence for the hypothesis.
Plan B suggested that it is possible to predict the future market capitalization of a cryptocurrency in dollars using the above formula. This allowed him to make a prediction of the bitcoin price at $ 100,000 after the last halving.

There are plenty of problems

There are a number of flaws in the analyst's hypothesis, both in theoretical judgment and in an empirical basis.
The theoretical basis of the model is based on the assertion that the market capitalization of monetary goods (for example, gold and silver) in dollars is directly dependent on the inflow of new units. No evidence or research has been presented to support this hypothesis, with the exception of isolated data points selected to plot the market capitalization of gold and silver against the trajectory of Bitcoin.
The second is the naive application of linear regression, which leads to a high probability of false results.
"Good" statistical results, such as a high R 2 , are not a meaningful finding. Many researchers underestimate how often such methods lead to false results. Especially in this situation, where there is a large degree of freedom in which a lot of random data can be tailored to a particular result.

From a theoretical point of view, what Plan B defined as “scarcity” is not, by definition. He used this term to describe the growth rate of the supply of an asset or new production, measured by the S2F metric. This suggests that increased inflows have a negative impact on price by increasing selling pressure from producers and vice versa.
At first glance, the assumption seems reasonable until it is taken into account that a high S2F value represents a dynamic system when the new supply is negligible compared to the current one. Plan B quoted the author of The Bitcoin Standard, Seyfedin Ammus:
"For gold, the price jump that doubles annual production will be marginal, increasing reserves by 3% rather than 1.5%."
Unsurprisingly, S2F hasn't had a direct relationship with gold prices over the past 115 years, as seen in the scatter chart below. The market capitalization of gold ranged from ~ $ 60 billion to ~ $ 9 trillion, all with the same S2F value of 60. The $ 6.5 trillion range does not really confirm the explanatory power of the theory and allows us to make the obvious conclusion that other factors determine the value of gold. ... 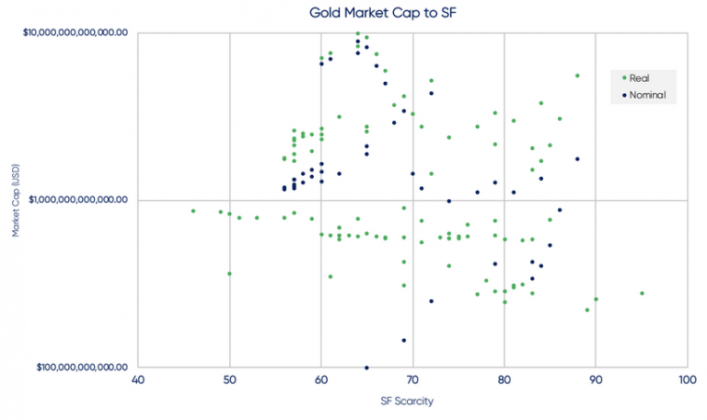 Recall that the value of gold in dollars is the ratio of the purchasing power of these assets:

When the dollar decreases, the price of gold rises, and vice versa. The purchasing power of the precious metal is relatively stable. We see that 88% of changes in the value of gold over the past 115 years can be attributed to a significant drop in the purchasing power of the dollar. In 1915 prices, $ 1 is now only $ 0.04. Most market participants understand this dynamic intuitively, buying and selling gold based on inflationary expectations for the dollar.
While a higher S2F may be a necessary characteristic for a hard money product, the metric itself does not say anything about how market participants value the product. Many cryptocurrencies that use the bitcoin code have exactly the same emission schedule and everyone understands that their S2F values ​​have nothing to do with their future or current market value.
As a result, we have a hypothesis that does not apply to any economic asset other than Bitcoin. Its only evidence is linear regression with questionable applicability and clearly biased selection.

$ 235 billion for bitcoin and further to infinity

An overview of linear regression and its mathematical underpinnings is not the subject of this analysis. Nevertheless, there are several implementation errors, well  signposted  in the research community that demonstrate why the model S2F with high probability is false. The obscure mathematics allowed its proponents to deflect criticism, so a conceptual understanding of why S2F is useless for predicting the price of Bitcoin is needed.
The model presented in the rationale for S2F is the slope equation that every seventh grader learns: y = mx + b. Ordinary least squares (OLS) regression is not a predictive model, but an estimate of the m and b values ​​that minimize the difference between the actual and estimated y values ​​given by the mx + b equation. In other words, every change in x results in a corresponding change in y. From a mathematical point of view for cointegrated variables, if y = mx + b + e, then ∆y = ∆x + e.
Examining the variables in this form helps to demonstrate why the S2F model is false. This can be seen in the following graph, where ∆x (orange line) is approximately 0 all the time, excluding periods after halving, and ∆y (blue line) has a large scatter.

Recall that OLS estimates how much y (market capitalization) changes with a corresponding  change in  x (S2F). On a monthly basis, the change in x is effectively 0.

The graph on the left shows a smooth projection because it uses actual supply data from Glassnode, while PlanB gives monthly year-on-year inflows to exaggerate the change in the metric with each halving.
As a result, the OLS model simply estimates the historical growth rate of Bitcoin. If we apply it to the near future, then in 2045 the price of bitcoin will be $ 235 billion, followed by a tendency to infinity, as the influx of cryptocurrency will approach 0.
The use of the sloped line formula makes possible the most naive prediction that if Bitcoin rose by X in the past, it will rise by X in the future. Remember that past performance does not determine future performance.

Darrell Huff wrote in How to Lie With Statistics:
“Many statistics do not correspond to reality. This is only because the magic of numbers overshadows common sense. "
On deeper thought, few would take seriously the idea that the price of gold is a function of the supply level and that the same is true for Bitcoin. However, the alleged mathematical precision stated in the Plan B article has led to the S2F model being actively promoted in both retail and professional investment channels.
Investors should be extremely skeptical about this model, even if they believe the first cryptocurrency is digital gold. The rationale behind S2F is not proper empirical analysis, but rather marketing material in which the author tries to convince readers that Bitcoin will be much more expensive tomorrow. This may turn out to be true, but it has nothing to do with the rate of emission.